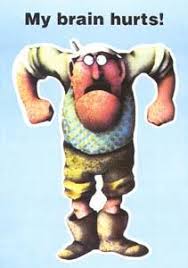 Last night I played Neuland and it was painful. Don't get me wrong I enjoyed it but it was certainly a thinking game and one that we struggled to get our heads around.
After a few rounds we had grasped the mechanics of the game, but were no where near knowing how to win the game.

It's a very clever game of resource and time manipulation. You have to use your workers to produce resources to then convert resources so that you can build bigger resource processing building. Each action takes time and the more actions you take the longer it will be until your next turn.
I screwed up my last go and left it wide open for Hannah to win, next time I really must pay more attention to the other players workers on the board.

After that brain draining game we finished off with a quick game of Ubongo. I started out strong but failed to beat the others so two game losses for me.

Other gaming in the week has been Pitchcar with my kids and there friends which was really good. They are getting pretty good at it, but tend to flick a bit hard at times causing there cars to shoot off the track. Plus a bit of Carc and Catan on the 360 against Gornad which has been good.

Pandemic expansion is released next week and I am really looking forward to that one, I hope its going to add some great bits to the game.

On a side note, Monopoly has released an online version that uses google maps as the board. So far the servers are being absolutely hammered, but keep trying if you want to buy your road.
Posted by Count Zero at 3:48 AM