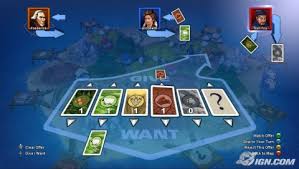 Gaming over Easter was pretty non existent, other than a quick game of Hey! that's my fish with the kids all other gaming was online.

I decided to rack up the difficulty level of Catan on the 360. I have won every game played on easy AI so upped the AI to moderate. I expected it to be tough, but I am sure those AI players are in cahoots. I played it three times over the weekend and in each managed to get a good clear lead to around 6-7 points then was shut out of all trading and received the robber more times than anyone.
What really galled me was when the other AI players caught up with my score they still wouldn't trade with me but happily swapped wood for sheep between themselves.

If this is what Medium is like, Hard must be a killer!

Catan is very well produced on the 360, it looks and plays really well and I can't fault it other than my experiences with the AI. If anyone wants a game, just let me know.
Posted by Count Zero at 5:32 AM 2 comments: 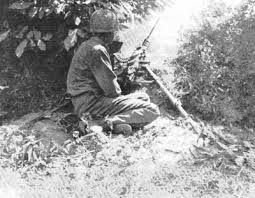 Combat Commander was played again this week, Hedgerows and hand grenades was the scenario and my Americans were beaten. The scenario was a nightmare for movement and line of sight. The hedgerows funneled my troops into one area and my hand management got them stuck. I had 3 ambush cards for most of the game, desperate to use them on a close assault but a lack of move cards held me back.
My artillery attacks initially did very well, but I never had the troops available in the right place to capitalize on it. In the end Mudhoney managed to win on sudden death with the majority of the VP's.
It was a good game if a little frustrating for me. It has however taught me more about hand management.

Other gaming has been only online. Yspahan has been released on the Yucata web site and I really like this game. It's a mid weight euro game that seems to tick the boxes for me. I have also got Catan for the Xbox 360 and enjoyed playing it this week. I think I have played 4 or 5 games against the easy AI and won easily. I think it's time to up the skill level a bit.

Jungle speed and the Swiss ticket to ride expansion arrived recently. I am desperate to give the Swiss map a play. The rules look really good and I am sure its going to make for some tense games. Hopefully this will hit the table soon.
Posted by Count Zero at 7:38 AM 1 comment:

Anyone who wants to give my brute a fight, click here.
Posted by Count Zero at 11:32 AM No comments:

A varied week of gaming started of on Sunday night in Guildford. Games hitting the table were Blokus, Ubongo and Formula D.

Blokus went down well and it became quite an aggressive game with lots of blocking going on. Frank managed to win 2 of the 3 games but most were very close. I was trying to start off with different pieces trying to gain the edge on getting the most number of corners into the center. It worked well, but not well enough.
Ubongo is a good quick game and I managed to grab the win. Frank didn't really like it but the other 2 did so I expect it to be played again. Some of the puzzles seemed to be harder than the others but I am sure its not the case.

As the Formula 1 started on Sunday it was fitting to play Formula D. Due to time constraints and a diversion on the way home we only played a single lap. I started in pole position but ended last. Typical ! We played the advanced rules for the first time and they made a huge difference. You couldn't afford to be too gung ho with your car.
I do like Formula D and the new expansion is tempting but the dice just hate me.

In the week I played Heck'n'Peck with the kids. I thought that they would get the game but it was a bit of a struggle. My youngest beat me by 3 worms so he must have been doing something right.

Delivered this week was Ticket to Ride Switzerland as I was after a TTR map that played well for 2 players and Jungle Speed as it looks like a great laugh. I am sure the POB guys will have a blast with it.
Posted by Count Zero at 8:11 AM No comments: