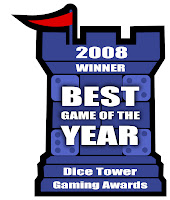 The 2008 Dice Tower Awards were revealed last week. For those of you that don't know the Dice Tower is a podcast hosted by Tom Vassal and covers board and card games. It's a good listen with some good humour and lots of information on new and old games.

This year I was asked to be on the panel and I jumped at the offering. After the initial selections were made we all had to vote on the different categories. I managed to get plays in on most of the games in the categories which helped out.

Anyway, the categories and winners are
I am pretty happy with the games that won, they are all good games and ones that I enjoy playing. I think Dominion was going to win Best Game hands down, its one of my favorite games of the year and I haven't even used any of my Intrigue cards yet.

Formula D also did very well, its another good game that has benefited from the reprint. I wanted it to win Best Artwork as well but Battlestar is a worthy winner.

Gaming has been a little light at the moment, but a session has been planned for next week so hopefully some new games will hit the table. I am dying to give Dominion: Intrigue a play, so we shall see.
Posted by Count Zero at 4:57 AM