From out of Africa 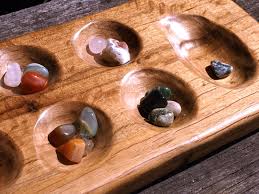 Last night was another Wednesday gaming night. This time my mate Moley was over with a present. A handcrafted Mancala set from Sierra Leone. Its really nice and after running through the rules we played best of three.
First game I lost big time, I missed out some of the moves and handed it to him on a plate. Next game I won and the last I lost. I was too busy looking at what I was doing and not what both sides could do. A typical failing of mine.

Mancala is a nice simple abstract game and looking it up on the web I see that there are other games that you can play with the set.

As we still had several hours of gaming I wanted to get a couple of need games to the table. The first was the Switzerland expansion for Ticket to Ride. This turned out to be a bit more cut throat than a typical game, but I managed to win by about 18 points. All thanks to a lucky ticket draw at the end of the game. The map worked really well and the new destination ticket types were really good. However the board quality was a bit poor. On one side half of the number were chopped. Plus there was a 5 train link on the board and no mention of how to score it!

Next up was a new card game. War for Edadh which has been self published by some uk designers. It took a bit of time to get our heads around it, slowly working through the basic rules but it has potential. I think we only just scratched the surface of the game and I want to give it another go. It will be in the bag to POB next week.
The artwork of the cards is really nice, I like the style even if some people have commented on how "busy" the cards are with information. I will probably do a review of this for the IGUK site later in the month.

Time was upon us but after another cup of tea we played a game of Lord of the Rings the Confrontation. A game that I like but never get to play enough. I lost with Moley managing to get the hairy footed Frodo to Mordor after Sam managed to snafu the witch king from me. A good game and one that I will make a point of playing again soon.

A good nights gaming with some new and old games hitting the table. Not sure whats planned for next week, will have to wait and see.
Posted by Count Zero at 2:45 AM